The industrial property market has slumped as a result of the latest Covid-19 outbreak, but industry insiders expect a strong recovery as soon as the pandemic is contained. 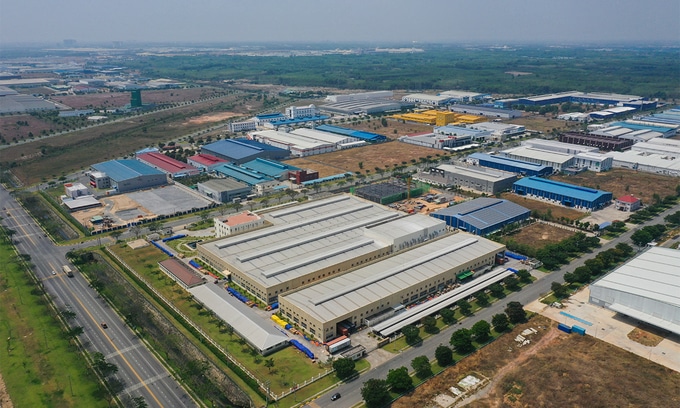 HCMC chairman Nguyen Thanh Phong recently convened a meeting with industrial land developers to find out about the difficulties they face.

They told him that one of the challenges was the high cost of land which increased rents and made the market less attractive.

Nguyen Van Be, chairman of the HCMC Export Processing and Industrial Zones Authority, said the industrial real estate market has nearly been frozen since the latest wave began at the end of April, with prices not increasing and few companies renting new lands to expand.

In the southern industrial province of Long An, the number of industrial investments in the first five months fell by seven from the same period last year to 58.

Industry insiders there said in the last two months demand for industrial land has fallen by 50-60 percent.

John Campbell, head of industrial real estate at property consultancy Savills Vietnam, said the rising number of Covid cases, especially in HCMC, has contributed to the fall in demand as companies cannot visit locations to check them out due to social distancing.

But demand would recover just like it did after the previous Covid waves were contained.

Dozens of new industrial parks were approved in the first quarter, including five in the northern province of Bac Ninh, each costing hundreds of millions of dollars to develop.

In Long An, around 1,500 hectares of lands are set to be cleared for industrial purposes this year to attract foreign investment, especially in the textile and garment, footwear and animal feed industries.

Other localities that have received approvals for new industrial parks are Vinh Phuc and Hai Duong in the north, Quang Tri and Quang Nam in the central region and Vinh Long in the south.

Several deals have been signed this year.

ESR Cayman Limited, a major developer in the Asia-Pacific, tied up with local player BW to develop 240,000 square meters of land at the My Phuoc 4 Industrial Park in the southern province of Binh Duong.

As of the end of the first quarter this year Vietnam had 370 industrial parks with 115,200 ha, according to the Ministry of Planning and Investment.