Even with the entire economy of Vietnam affected by the coronavirus pandemic, the property market’s prospects remain positive as it promises to show the first signs economic recovery.

Vietnam has retained exceptional growth, despite being affected by various economic crises over the last 25 years. Besides being considered the sector of choice for investors in Vietnam, property remains the safest and most effective investment channel.

Even though COVID-19 might last into early 2021, Savills anticipates a strong recovery from 2021 to 2022 and beyond. Moreover, effective and timely government support, as shown through its effective pandemic response and recent stimulus policies, will provide further powerful leverage for real estate businesses and the national economy.

Since the mid-90s, the domestic property market has had a pattern of impressive growth, brief downturn, and recovery. However, the COVID-19 pandemic in the first half of 2020 negatively affected the market in an unprecedented manner.

1995 to 1998: Stabilising relations with the United States and officially joining ASEAN in 1995 marked successful milestones.

The transition from centrally planned to a market driven economy was establishing a robust platform for lasting change and growth.

At the same time, GDP growth and increased consumer confidence resulted in rising land prices, as the property market started to show signs of promise.

The domestic market then entered a prolonged slowdown with the onset of the Asian Financial Crisis in 1998 impacting the nascent market economy.

GSO data shows 5.76 per cent economic growth in 1998 while inflation reached 9.2 per cent. However, the limited market opening resulted in a proactive government response which helped successfully manage the crisis and enable a strong foundation for future growth.

1998 to 2008: The early years of the 21st century were characterised by further economic integration.

In 2001, the Vietnam-US Bilateral Trade Agreement (BTA) was ratified followed by Vietnam becoming a member of the World Trade Organisation (WTO) in 2006.

However, land prices increasing significantly over the two most frantic periods of 2001 to 2003, and 2007 through 2008, started to exclude lower-income investor participation from Ho Chi Minh City and Hanoi. 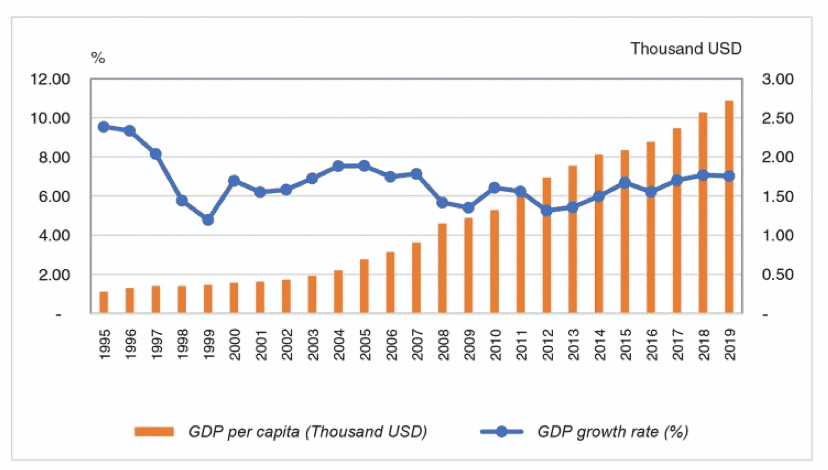 Property inventory in 2012 was over VND100 trillion ($4.35 billion), while property enterprises under bad debt increased. Rapidly rising inflation forced the State Bank to tighten monetary policies.2008 to 2018: Growth punctuated by slowdown continued. In mid-2008, effects from the Global Financial Crisis led to a downward cycle in the domestic property market and land prices dropped by up to 40 per cent.

Economic data indicating 7 per cent real GDP growth in 2019, reflected one of the fastest-growing economies in the region.

While globalisation has positively affected Vietnam, the COVID-19 pandemic has caused extensive damage to global and local economies.

Fortunately, early and decisive measures from the government meant Vietnam was far less affected than other countries in the region. While fiscal policies were stable with GDP growth reaching 3.8 per cent in the first quarter of 2020, the pandemic, as it expanded, became more unpredictable.

The Asian Development Bank (ADB) estimates that Vietnam’s GDP growth will reach 4.1 per cent in 2020. Although this is 0.7 per cent lower than their forecast in April, it remains the highest forecast growth in Southeast Asia. The World Bank anticipates 3 per cent GDP growth in 2020, and its 6.8 per cent growth forecast for 2021 shows confidence remains high in the local economy.

The Vietnamese economy is primed for recovery and the real estate sector is set to be one of the key beneficiaries in 2021 and beyond. – Savills Vietnam