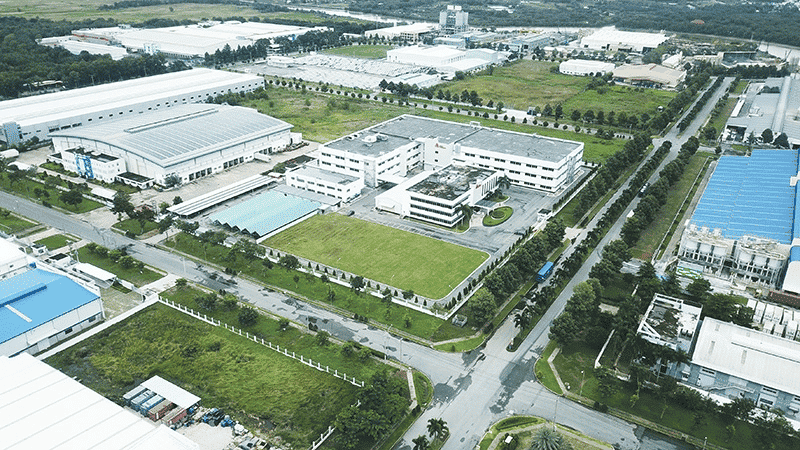 While expansion of industrial property land funds may be a necessary factor to attract waves of foreign investment into Vietnam, experts are warning that the massive licensing of new projects and expanding existing ones by local authorities could lead to an oversupply situation.

Nguyen Duy Phuong, a senior investment consultant from Viet Capital Securities JSC, said that if industrial property increased widely, there would be many consequences from lack of experience from newly-built investors, and attractiveness to global tenants falling.

“Industrial property is not just simply a factory system. But it must be a complete complex which can offer enough facilities for local workers such as housing, education, healthcare, and cultural and sports facilities. Vietnam’s industrial property system would be less attractive without these facilities,” Phuong said.

Some large-scale investors such as Vietnam-Singapore Industrial Park (VSIP) and Becamex IDC facilitate enough services for workers. However, many other industrial zones (IZs), especially Vietnamese backed-investors, are building factories with working space only, while their workers and experts are moving to urban centres for entertainment services.

The workers must lease privately and leave their children in kindergartens located near the zones, and with a worker’s salary, they can only afford minimum living standard and less professional or reliable kindergartens, Phuong said, adding that these supportive facilities cannot provide enough sustainable development for those projects.

According to Nguyen Tho Tuyen, chairman of BHS Real Estate development and Investment JSC, IZ investors were mostly specialised in building a park and then leasing to tenants. Therefore supportive services and facilities were not included in their projects.

“This is a big gap in their business because they can have the higher rental and attract global tenants only if their parks are equipped with more supportive facilities,” Tuyen said.

Su Ngoc Khuong, senior director of Savills Vietnam, added that it is high time for investors to change their mindset. “Industrial property investors must have more synchronised solutions on logistics, infrastructure, and support facilities to ensure that their property can be leased with a sustainable rate,” Khuong said.

He added that this problem needs to be reviewed by local authorities to be ready to receive investment waves from abroad.

The latest figures from Savills Vietnam reported that rents of industrial property had increased recently despite the impact of COVID-19 with an average increase from 7 to 10 per cent per year.

In the southern provinces, Ba Ria-Vung Tau saw the highest increase of rental with 18 per cent ($65 per sq.m), followed by Long An with 7.8 per cent ($123 per sq.m). Dong Nai and Binh Duong were next on the list.

The Ministry of Planning and Investment (MPI) is now drafting a replacement for Decree No.82/2018/ND-CP dated 2018 on management of IZs and economic zones (EZs).

This new decree will add a regulation on the treatment for cases in which the landlords increase their rental by more than 30 per cent compared to the rental already registered to the local management administration units of IZs and EZs previously.

Accordingly, local management administration units of these zones would be given the right to negotiate with local landlords and tenants, to provide a reasonable rent but within the government’s barriers for every zone.

According to the MPI, as of May, Vietnam had 394 IZs established with a total natural land area of nearly122,000 hectares. Of those, 286 are in operation with an occupancy rate of 71.8 per cent. IZs across the country have created more than 3.78 million jobs for local workers. Over 80 zones were added to the system from March 2020 to May 2021.

Boustead Projects Ltd., a real estate developer operating in Singapore, China, Malaysia, and Vietnam, earlier this year established a partnership with KTG for the acquisition of a jointly-owned Boustead and KTG Industrial Management Co., Ltd., as well as the proposed acquisition of 49 per cent in KTG Industrial Bac Ninh Development JSC.

Meanwhile, ESR Cayman Ltd., one of the largest Asia-Pacific logistics and real estate property developers, and BW Industrial Development JSC entered into a joint venture to develop and own My Phuoc 4 Industrial Park (IP) in Binh Duong province. The province was also chosen for placing its first industrial development in Vietnam of Frasers Property Vietnam, with Binh Duong IP. Over 200,000 sq.m of completed facilities are expected to be delivered in the next 6-7 years.

KCN Vietnam Industrial JSC also acquired a land area of 250ha and poured in $300 million to develop a system of logistics and factories in Bac Giang, Haiphong, Haiduong, Dong Nai, and Long An.

A recent analysis report on industrial property released by Mirae Asset Securities Vietnam reported that there is a race to expand the land fund from existing IZ developers.

BW Industrial Development JSC (a joint venture between Becamex IDC and Warburg Pincus LLC – US) has increased the total industrial land area to 518ha in major cities recently, from more than 200ha in 2018.

Becamex IDC currently holds more than 2,400ha of industrial land. Since 2018, Becamex has implemented many new industrial projects through VSIP and BW joint ventures. According to the capital contribution ratio, the potential land fund of Becamex in 2021 is expected to be about 1,575ha.

Many other developers such as IDICO Corporation and Kinh Bac Development Holding Corporation are actively expanding their portfolios to thousands of hectares.

The Ministry of Planning and Investment is collecting comments on a draft to replace Decree No.82/2018/ND-CP regulating industrial zone (IZ) and economic zone management.

The draft decree has added a number of new provisions to ensure compliance with newly promulgated laws as well as the reality of investment and development in these areas in recent years. Regarding the conditions for consideration and approval of investment policies on projects on construction and business of infrastructure of IZs, the draft decree amends and supplements a number of contents.

These include that the area of the IZ is suitable to the investment attraction capacity in the province or centrally run city and is at least 75 hectares in size; ensures that at least 5 per cent of the total industrial land area of the IZ is reserved for small- and medium-sized enterprises, the supporting industry, and innovative and other prioritised enterprises; and that support in terms of production and business premises is in accordance with laws on land leasing and sub-leasing.

The condition on an occupancy rate of 60 per cent is not applied in several cases. First, if the total natural land area of IZs in the province or centrally run city is under 1,000ha. Second is if the IZ previously had an investment project for construction and infrastructure business approved by a competent authority but was terminated and assigned to a new investor.

The third case is if projects on construction and business of infrastructure of IZs operate under the models of ecological, supportive, and intensive parks. Fourth, the occupancy rate is not applied if the investor commits to use at least 30 per cent of the land area in the IZ for high-tech initiatives, for the supporting industry, and for innovative projects and others to prioritise investment attraction.

By the end of April there were 575 IZs nationwide on the master plan for their development in Vietnam as approved by the prime minister, with a total area of 575 IZs at nearly 220,000ha and accounting for 0.66 per cent of the total land of the country. The IZs have been established in 61 provinces and cities, mainly concentrated in key economic regions, in order to promote the advantages of geographical location and economic development potential.

Elsewhere, Vingroup has expanded its portfolio to industrial property with an investment of more than $400 million in its subsidiaries, Vinhomes Industrial Park Investment and Development JSC. Two projects, the 200-ha Nam Trang Cat IP and 319-ha Thuy Nguyen IP in Haiphong, are expected to come into operation by the end of the year.