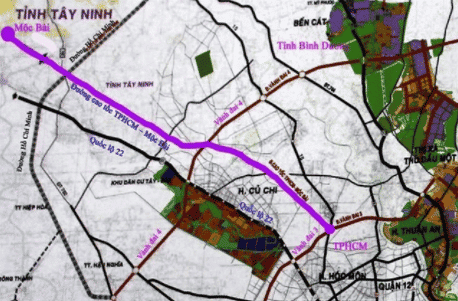 The new expressway will be 53.5km long, including nearly 24km in HCM City, and run from Ring Road No 3 in the city’s Hóc Môn District to Mộc Bài International Border Gate with Cambodia in Tây Ninh Province.

It will help unlock the unique position of National Highway No 22, shorten travel time between the two localities, and reduce logistics costs, Trường said.

Project capital is estimated at VNĐ15.9 trillion (US$695.3 million), including VNĐ5.9 trillion ($258 million) for site clearance, compensation and resettlement costs in HCM City.

The project will be divided into two phases.

The first phase is expected to be completed by 2025 with at least four lanes. In the second, by 2045, it will be expanded to six lanes in Tây Ninh and eight lanes in HCM City.

A cooperation agreement between the city and Tây Ninh on the HCM City-Mộc Bài Expressway project was signed in 2019.

Under the agreement, the people’s committees of the two localities will work together to speed up the progress of the project.

The two localities plan to complete site clearance and compensation for affected local residents and select the investors.

HCM City has been given the authority to make investment decisions pertaining to the expressway.

By the end of the year, a pre-feasibility report on the project will be submitted to the Prime Minister for approval of investment.

Trường said it was necessary to learn lessons from shortcomings in other expressway projects now under construction.

The city needs to have special investment incentives to attract domestic and foreign investors, he said.

It will also enhance transport connectivity and promote trade between Việt Nam and neighbouring countries.